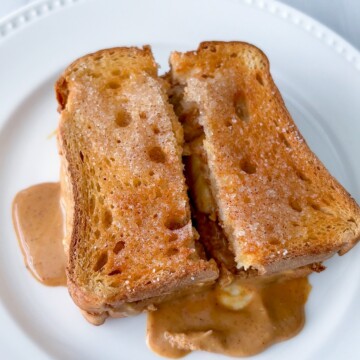 Have Mercy! This fried peanut butter and banana sandwich is the ultimate indulgence. The cinnamon sugar topping gets crisp and golden and the center of the sandwich is ooey gooey! It takes less than 10 minutes and is so easy! This is a vegan and gluten free spin on that famous Elvis sandwich. Everyone is going to love it!
5 from 1 vote
Print Recipe Pin Recipe
Prep Time 5 mins
Cook Time 5 mins
Total Time 10 mins
Servings 1
Calories 386 kcal

Calories: 386kcalCarbohydrates: 49gProtein: 7gFat: 20g
Tried this recipe?Let us know how it was!