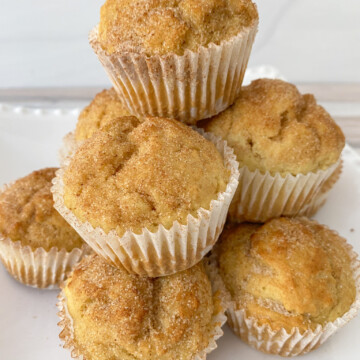 These easy vegan and gluten free cinnamon sugar cupcakes are as simple to make as they are delicious! They are fluffy, perfectly moist, soft, vanilla flavored, and tossed in cinnamon sugar! Everyone will love them and no one will guess they are vegan and gluten free (optional).
4.50 from 2 votes
Print Recipe Pin Recipe
Prep Time 5 mins
Cook Time 25 mins
Total Time 30 mins
Servings 16
Calories 94 kcal

Serving: 1gCalories: 94kcalCarbohydrates: 15gProtein: 1gFat: 3g
Tried this recipe?Let us know how it was!