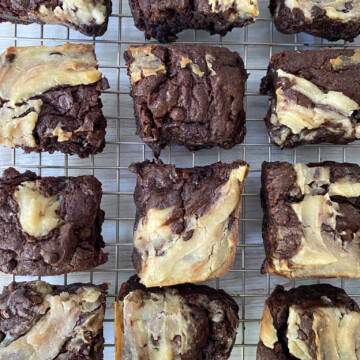 Ooey Gooey Chocolatey brownies join forces with cheesecake filling to create the most insanely delicious vegan cream cheese brownies! This recipe is as easy as it is delicious! It starts with my famous buttery and fudgey vegan brownie batter that is truly better than the box. We swirl in sweetened vegan cream cheese and the result is an over-the-top delicious vegan dessert that everyone will love!
4.84 from 6 votes
Print Recipe Pin Recipe
Prep Time 10 mins
Cook Time 40 mins
Total Time 50 mins
Servings 16
Calories 252 kcal

Serving: 1gCalories: 252kcalCarbohydrates: 30gProtein: 2gFat: 14g
Tried this recipe?Let us know how it was!