With 15 minutes and 2 (ish) ingredients, you can have these warm and freshly baked bagel bites that are vegan, gluten-free (if preferred), and ridiculously yummy! With an optional cinnamon sugar topping, these 2-ingredient bagel bites are perfectly sweet and savory and a quick and easy breakfast that everyone will love!

Why You'll Love This Recipe

So Easy: I mean, can it get any easier than 2 ingredients? These bagel bites are so easy to whip up and are super healthy with only two ingredients.

Toppings: These 2-ingredient bagel bites are topped with a cinnamon sugar mixture, but you can top them with whatever you like! Try topping it with everything seasoning or sesame seeds. Or, spread a little bit of vegan cream cheese on each bite!

Best To-Go Option: If you are busy and need a quick breakfast, these are great to have on hand. Keep them in the fridge and grab a few every morning to start your day off right!

To make your 2-ingredient bagel bites with cinnamon sugar from scratch, you'll need two mixing bowls, a baking sheet, and parchment paper. Here is how to make it:

Yes! Since these bagel bites are made with only flour and yogurt, they are much healthier than the store bought. They have no extra sugar or additives.

Can I freeze my left over bagel bites?

Yes, these are freezer friendly and can be frozen for up to 3 months. After letting them cool, wrap them individually in plastic wrap and place them in an airtight container. When you are ready to eat them, let them thaw on the counter and then pop them in the air fryer or oven to toast them up. 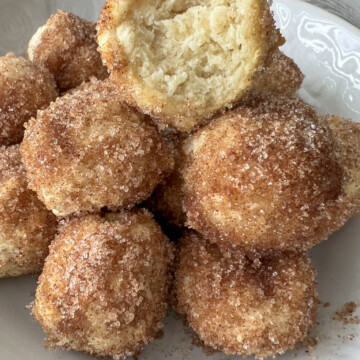 Calories: 43kcalCarbohydrates: 7gProtein: 1gFat: 1g
Tried this recipe?Let us know how it was!