These are literally the Best Gluten Free Cinnamon Rolls you will ever have! With a golden, fluffy dough that is filled with a delicious cinnamon sugar mixture. All topped off with a vegan cream cheese icing that is out of this world!

These Gluten Free Cinnamon Rolls take a bit of extra time due to letting the dough rise. Even though they take some extra time, trust me when I say these are worth every second of waiting! But if you are in a time crunch, try my easy No Yeast Cinnamon Rolls instead and you'll have delicious, tender cinnamon rolls on the table in no time (under 30 minutes!).

This recipe is for my gluten free cinnamon rolls. If you would like a regular cinnamon roll recipe, you can check out my Classic Vegan Cinnamon Rolls Recipe!

My best gluten free cinnamon rolls are made with whole, good-for-you ingredients to make delicious and wholesome cinnamon rolls. Here's what you'll need:

Can I reheat cinnamon rolls?

Absolutely! To store leftover cinnamon rolls, put them in an airtight container in the fridge. To reheat, you can pop these in the microwave for about 20 seconds. Don't warm them up for too long or all the icing will fall off!

How do I make gluten free cinnamon rolls in advance?

To make in advance, follow the instructions up until it is time to ice the cinnamon rolls. Instead of icing them, let them cool and then wrap them in plastic wrap, then place them in an airtight container and freeze them until you are ready to eat. Once you want to eat the cinnamon rolls, let them thaw in the fridge, warm them up in the oven and ice them the day of.

Why isn't the dough rising?

The dough might not be rising for a different number of reasons. First, make sure that you added all of the ingredients in their correct measurements. If so, then it might be the temperature of your house that is preventing the dough from rising. If your house is particularly cold or it is winter time, then give the dough a bit of extra time to rise.

Can these rolls be made vegan?

These can absolutely be made vegan by replacing the dairy based ingredients with vegan alternatives such as almond milk, vegan butter, and vegan cream cheese. If you want a gluten based vegan cinnamon roll, head over to my Classic Vegan Cinnamon Rolls Recipe. 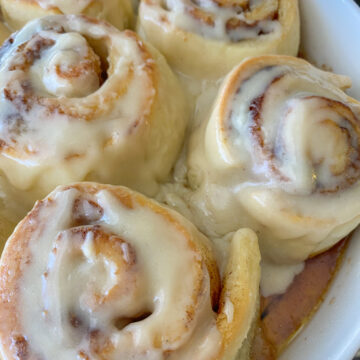 These are the best gluten free cinnamon rolls you will ever have! The golden, fluffy, and buttery dough is wrapped around a delicious cinnamon sugar filling. The entire thing is topped with my famous vegan cream cheese icing for an out of this world cinnamon roll sensation!
5 from 1 vote
Print Recipe Pin Recipe
Prep Time 20 mins
Cook Time 30 mins
Total Time 50 mins
Servings 12
Calories 334 kcal

Not Gluten Free? Click the link below for my Classic Vegan Cinnamon Rolls Recipe