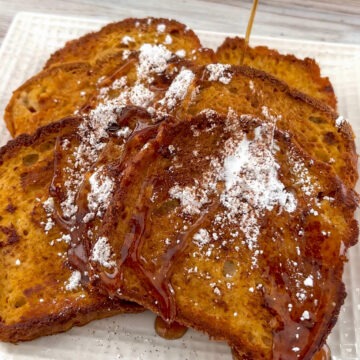 This vegan french toast recipe has a delicious fall spin! If you are like me, and love pumpkin-spiced everything during the cooler weather months, definitely give this vegan pumpkin french toast a try! You need a handful of ingredients that you probably have on hand. Everyone will love it and no one will guess it's vegan and gluten free optional!
5 from 1 vote
Print Recipe Pin Recipe
Prep Time 10 mins
Cook Time 15 mins
Servings 16
Calories 110 kcal

Serving: 16gCalories: 110kcalCarbohydrates: 17gProtein: 3gFat: 3g
Tried this recipe?Let us know how it was!