This Easy and Quick Vegan Apple Bread Recipe is absolutely mouthwatering. It's healthy, vegan, gluten-free friendly and no one will ever guess! You only need a handful of simple and wholesome ingredients like oats, applesauce, and cinnamon. And, the result is a fluffy, tender, and pillowy soft of cinnamon spiced apple bread that everyone in your home will love. Option to top this delicious bread with vegan cinnamon cream frosting to make it an extra special treat.

This easy vegan apple bread recipe is so simple.

Step 1: Start by preheating the oven and greasing a metal loaf pan.

Step 2: Mix the wet ingredients. Then, add the baking powder, baking soda, and spices. Mix well. Add the oats and oat flour and then mix until a apple bread recipe forms (this will be similar to banana bread texture).

Step 3: Pour the batter into the loaf pan. Bake and then allow it to cool completely before serving.

You can enjoy this delicious and healthy vegan and gluten-free apple bread recipe several ways. The first option is to enjoy it plain and unfrosted. Don't let the word "plain" fool you, it's delicious on its own. Another option is after transferring the apple bread batter into the loaf pan, line the top of the batter with granny smith (more tart flavor) or honey-crisp (more sweet flavor) apple slices and bake.

Either of these serving options are delicious on their own or served warm with a little vegan butter on top.

For a sweeter treat, turn this vegan and gluten-free apple bread into an apple cake by adding cinnamon cream cheese frosting on top. Here's what you'll need:

The Best Apples To Use for Apple Bread

This is an easy and quick apple bread recipe, so we use store-bought unsweetened applesauce. If I were making apple sauce for this recipe from scratch, I would use honey-crisp for a sweeter applesauce or granny smith apples for a more tart applesauce.

How To Freeze Apple Bread

Bake the apple bread until it's completely cooked and you can insert a toothpick and it will come out clean. Then, allow the vegan apple bread to cool completely. Once it's cool, wrap it in plastic wrap and freeze for 60-90 days.

Tips For The Best Apple Bread

Mixing: Be careful not to over-mix your batter.

Baking Dishes: Use a metal baking dish. Metal conducts heat more evenly than glass or ceramic. I recommend a 9x5 inch loaf pan. If you don't have a loaf pan, you can also use a round or square metal cake pan. If using a round or square cake pan, bake for 25-30 minutes as opposed to the full 30-40 minutes.

Baking: Don't over-bake this apple bread recipe or it will become hard. You will know it's done when you can insert a toothpick into the center and it comes out clean.

Serving: If you are serving your apple bread warm, I recommend spreading a little vegan butter on top. It's heavenly! 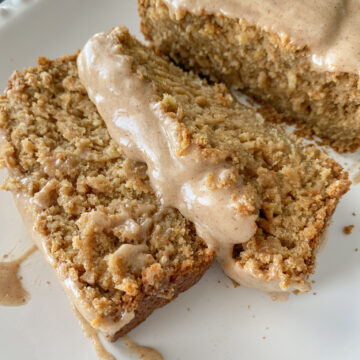 This vegan apple bread is divine! It's super moist, soft and perfectly fluffy! It's made with oats, oat flour, and sweetened with maple syrup - making it naturally gluten free and better-for-you! Option to serve the bread as is, spread with vegan butter, or top with some of my famous cinnamon vegan cream cheese icing. Either way, you will have a vegan breakfast or dessert that everyone in your home will fall in love with!
5 from 5 votes
Print Recipe Pin Recipe
Prep Time 5 mins
Cook Time 35 mins
Total Time 40 mins
Servings 12
Calories 233 kcal

Serving: 1gCalories: 233kcalCarbohydrates: 28gProtein: 3gFat: 11g
Tried this recipe?Let us know how it was!