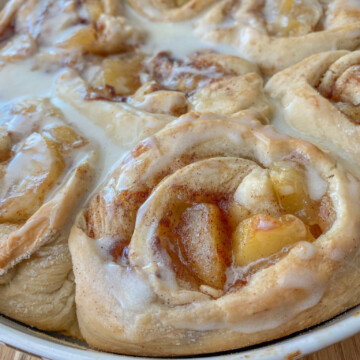 Apple pie meets cinnamon roll and the results are outstanding! These vegan apple cinnamon rolls are golden on the outside, buttery and soft on the inside, and filled with delicious cinnamon baked apples! If you love cinnamon rolls, you will love this apple version!
5 from 2 votes
Print Recipe Pin Recipe
Prep Time 1 hr 30 mins
Cook Time 30 mins
Total Time 2 hrs

Click Here for my No-Yeast Gluten Free Apple Cinnamon Rolls Recipe
Tried this recipe?Let us know how it was!