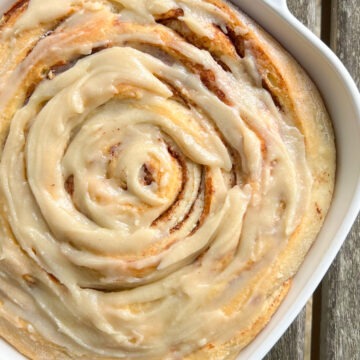 A cinnamon roll the size of a cake! Dreams do come true! I tested this recipe with my non-vegan family, and everyone agreed ... this Giant Cinnamon Roll Cake is out of this world delicious! The warm vegan cinnamon roll dough is golden, fluffy, and buttery. The cinnamon roll filling is gooey with just the right amount of sweetness. The cake is topped with my famous vegan cream cheese icing. Consider this your warning, this vegan cinnamon roll cake is dangerously delicious!
5 from 1 vote
Print Recipe Pin Recipe
Prep Time 1 hr 30 mins
Cook Time 40 mins
Servings 12
Calories 233 kcal

Serving: 1rollCalories: 233kcalCarbohydrates: 31gProtein: 1gFat: 17g
Tried this recipe?Let us know how it was!