Not only are these quick and easy, but they are made with minimal ingredients and can be vegan and gluten free. They bake up buttery, golden brown, and filled with cinnamon sugar. Add a drizzle of homemade cream cheese frosting for the ultimate breakfast or brunch!

In order to make these you need everyday ingredients like:

how to make this recipe

This no yeast cinnamon roll recipe is super easy, but here are a few tips so they're perfect every time!

Can I freeze dough before baking?

Yes, you can freeze cinnamon roll dough before baking. Simply, roll and cut, then wrap them tightly in plastic wrap and freeze them. The night before you want to bake them, transfer to round pan and let them thaw in the fridge overnight.

How do I store and reheat cinnamon rolls?

These are best right after baking, when fresh and warm. However, leftover rolls will keep for 1-2 days, covered at room temp. To keep them fresh longer, store them in the refrigerator for up to 5 days. Simply reheat in the microwave to get them soft and gooey again!

Why is my dough so sticky?

If the dough appears too sticky, continue kneading and add flour one tablespoon at a time until the dough reaches a tacky texture.

Why didn't my dough rise?

Because there is not active dry yeast in this recipe, the dough will not rise before baking. The baking powder should give the rolls plenty of lift while baking. If the cinnamon rolls do not rise while baking, check to ensure that your baking powder has not expired.

Why aren't my cinnamon rolls fluffy?

The rolls should become nice and fluffy while baking. If they do not, it could be due to expired baking powder or not using the correct ingredient measurements. 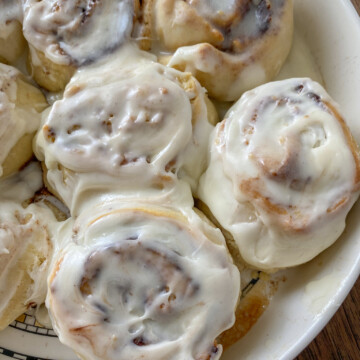 Buttery, golden, filled with cinnamon sugar and drizzled with homemade vegan cream cheese frosting! These easy vegan cinnamon rolls only use a handful of ingredients and can be made in 30 minutes. You can make these cinnamon rolls vegan, gluten free, and without yeast (as opposed to a classic cinnamon roll)! Everyone in your home will love them and no one will believe they're plant-based!
5 from 3 votes
Print Recipe Pin Recipe
Prep Time 10 mins
Cook Time 20 mins
Total Time 30 mins
Course Breakfast
Cuisine American
Servings 12 rolls
Calories 314 kcal