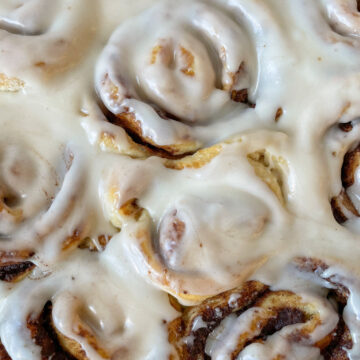 These are the best cinnamon rolls you will ever have! Vegan or not! The golden, fluffy, and buttery dough is wrapped around a delicious cinnamon sugar filling. The batch is topped with my famous vegan cream cheese icing for an out of this world cinnamon roll sensation!
4.50 from 2 votes
Print Recipe Pin Recipe
Prep Time 1 hr 30 mins
Cook Time 30 mins
Total Time 2 hrs
Servings 10
Calories 344 kcal

Need to make these cinnamon rolls gluten free? Click the link below!

Serving: 1gCalories: 344kcalCarbohydrates: 49gProtein: 4gFat: 15g
Tried this recipe?Let us know how it was!