This Vegan Cinnamon Cake with Cream Cheese Frosting is moist, fluffy, and so easy to make! Enjoy it on its own or topped with a simple, 3-ingredient vegan cream cheese icing.

If you have never had vegan cinnamon cake with cream cheese frosting, you are truly missing out. This is essentially coffee cake for vegans and it is super fluffy, tender and delicious. You can make this into a gluten-free cinnamon cake, or even a whole wheat cinnamon cake with just a few adjustments.

I am a HUGE fan of cinnamon, so I love to enjoy this cinnamon cake with a cup of chai for a morning breakfast or an afternoon treat. Skip the coffee shop coffee cake, and give this vegan cinnamon cake a try!

Why You'll Love This Recipe

For the Cream Cheese Frosting:

This easy cinnamon swirl cake just take a little bit of prep and mixing, and then the oven does all the work! You don't have to be a seasoned cake-maker to be able to make this delicious creation.

For full, printable instructions, reference the recipe card at the bottom of the post.

Can I make this cake ahead and freeze it?

Absolutely! You can bake this cake, let it cook and then wrap it well in plastic wrap and put it into an airtight container. Thaw it before you put on the frosting. In the fridge, this cake will last up to one week.

Can I make a whole grain cinnamon cake?

Definitely, you can substitute the flour for whole wheat flour to make this vegan cinnamon cake more healthy! 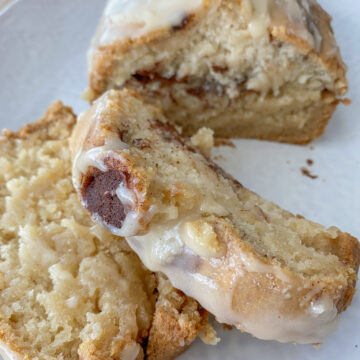 This vegan cinnamon cake is moist, fluffy, and so easy to make! What's a cinnamon cake, you ask? It's basically a vanilla cake with cinnamon swirls. Cinnamon cake was also my favorite birthday treat when I was a kid - and this vegan version is even more delicious! Enjoy on it's own or topped with mouthwatering 3-ingredient vegan cream cheese icing!
4.67 from 6 votes
Print Recipe Pin Recipe
Prep Time 10 mins
Cook Time 45 mins
Total Time 55 mins
Servings 12
Calories 278 kcal

Serving: 1gCalories: 278kcalCarbohydrates: 40gProtein: 3gFat: 9g
Tried this recipe?Let us know how it was!