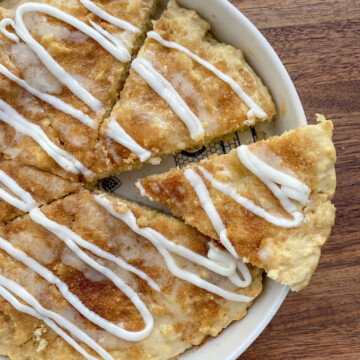 This vegan and gluten free cinnamon sugar bread will remind you of delivery-style cinnamon sticks that come with your pizza! Yall, trust me when I say, this vegan focaccia bread is heavenly! Traditional focaccia is savory and I've created a sweet version for those with a sweet tooth! This vegan and gluten free bread is quick and easy and only takes 20 minutes to bake! Topped with melted vegan butter, cinnamon sugar, and vegan vanilla icing - this is a better-for-you dessert that the entire family will love!
5 from 1 vote
Print Recipe Pin Recipe
Prep Time 10 mins
Cook Time 20 mins
Total Time 30 mins
Servings 12
Calories 162 kcal

Serving: 1gCalories: 162kcalCarbohydrates: 23gProtein: 2gFat: 7g
Tried this recipe?Let us know how it was!