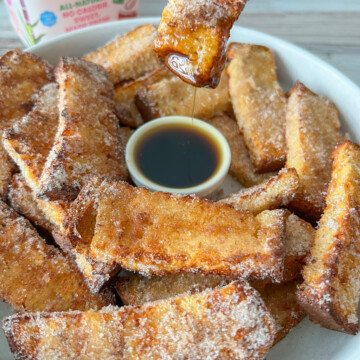 These cinnamon sugar french toast sticks are crisp, golden, buttery, and so delicious. This is a family-friendly recipe that can be made dairy-free, gluten-free, and even sugar-free.
5 from 1 vote
Print Recipe Pin Recipe
Prep Time 10 mins
Cook Time 20 mins
Total Time 30 mins
Servings 8
Calories 88 kcal

Calories: 88kcalCarbohydrates: 10gProtein: 2gFat: 4g
Tried this recipe?Let us know how it was!