If you are looking for a dairy-free, egg-free, and flax-free vegan french toast that tastes as rich, indulgent, and delicious as the traditional version - this recipe is for you! This Easy Vegan French Toast Recipe is gluten-free friendly, made in minutes, and it's so good! You only need a handful of simple ingredients to prepare the rich and decadent french toast custard. Use regular or gluten-free bread and enjoy a slice of vegan breakfast heaven!

How To Make Vegan French Toast

Step 1: Begin by preparing the vegan french toast custard. Mix the non-dairy milk, yogurt, cinnamon, and vanilla extract together. Soak the bread in the custard mixture and set aside.

Step 2: Bring a skillet with vegan butter to medium heat. Once the butter begins to sizzle, add the soaked bread. Fry on each side until golden brown.

Do I need eggs to make french toast?

Thanks to this easy vegan french toast recipe, no you don't! We use non-dairy yogurt as a thickener (instead of eggs) to create a rich and creamy french toast custard.

Do I need dairy to make french toast?

Instead of using heavy cream or whole milk which traditional french toast recipes call for, use oat or almond milk in this recipe. You will barely taste the difference and it will make your french toast a little healthier!

What kind of bread should I use for vegan french toast?

You can use anything from sandwich bread to slices of sourdough bread in this french toast recipe. If you are vegan, just ensure your bread of choice contains no eggs or milk. If you are gluten-free, I recommend the brands Canyon Ranch of Schar. The slices of bread are nice and thick, perfect for soaking up the french toast custard.

Pro Tip: Stale bread tends to soak up the vegan custard and hold together while frying more than soft fresh bread.

How To Serve French Toast?

Ideally, you will serve this vegan french toast fresh from the skillet and warm. I like to sprinkle a little powdered sugar on top and drizzle it with maple syrup before serving. Fresh fruit like banana slices and berries also go well with this recipe.

Can I freeze French Toast?

Yes! Allow your vegan french toast slices to cool completely before storing them in a freezer bag separated by wax paper.

The best way to reheat french toast is to microwave it until warm (usually about 30 seconds)! You can also use your toaster oven.

Other Recipes To Try 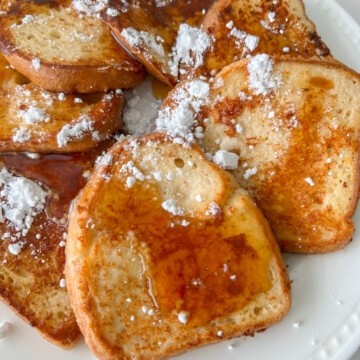 Golden and crisp on the outside, soft and fluffy on the inside - this easy french toast recipe is made without eggs or dairy and it's so good. Made with 6 simple ingredients that you probably already have on hand. Everyone will love it and no one will guess it's vegan.
5 from 1 vote
Print Recipe Pin Recipe
Prep Time 5 mins
Cook Time 15 mins
Total Time 20 mins
Servings 16
Calories 87 kcal

Serving: 1gCalories: 87kcalCarbohydrates: 13gProtein: 2gFat: 2g
Tried this recipe?Let us know how it was!