Vegan Cinnamon Sugar Donuts are one of those classic donut flavors that everyone loves. There's nothing not to like! They are fluffy, buttery, and flavored with vanilla. Coated in a little vegan butter and cinnamon sugar topping, these donuts come out perfect! They are also super easy, vegan, and can be made gluten free.

These baked vegan cinnamon sugar donuts are simple to make with just a few pieces of baking equipment. Here are the simple steps to the perfect donuts:

How should I store my leftover donuts?

You can store these donuts in an airtight container on the counter for up to 1 day, or place them in the fridge for up to 1 week. You can eat them as is, or microwave them for about 20 minutes so that they are warm.

Can I freeze cinnamon sugar donuts?

Yes! You can freeze these donuts in individual freezer bags for up to 3 months. When you are ready to eat them, you can let them thaw to room temperature or you can pop them in the microwave for about 45 minutes or until heated through. 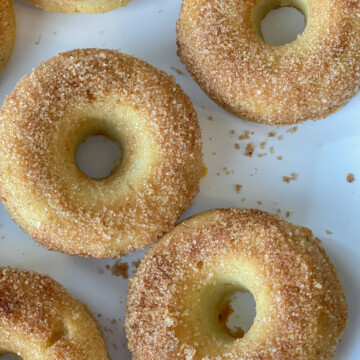 Cinnamon Sugar donuts are one of those classic donut flavors that everyone loves. There's nothing not to like! They're fluffy, buttery, and flavored with vanilla! They're coated with a little vegan butter, and cinnamon sugar topping, and the results are amazing! These donuts are perfection and they're also super easy, vegan, and can be made gluten free! This is a family-friendly and kid-friendly dessert that everyone will love, anyone can make, and no one will suspect is vegan!
5 from 4 votes
Print Recipe Pin Recipe
Prep Time 5 mins
Cook Time 30 mins
Total Time 35 mins
Servings 12
Calories 210 kcal

Serving: 1gCalories: 210kcalCarbohydrates: 34gProtein: 2gFat: 7g
Tried this recipe?Let us know how it was!