Can't decide between a golden and buttery cinnamon roll or a fluffy stack of pancakes? Get the best of both worlds with these delicious and indulgent Cinnamon Roll Pancakes. This is an easy recipe that is vegan and gluten-free friendly.

How To Make Cinnamon Roll Pancakes

Step 1: To begin, prepare the cinnamon roll pancake batter.
Step 2: Then, make the cinnamon roll filling in a separate bowl.
Step 3: Spoon the pancake batter into a greased skillet at then use a spoon or pastry bag to create a spiral of cinnamon roll filling into each pancake. Option to add a little more batter on top of each pancake so that the filling doesn't burn. Flip when bubbles form on the top.
Step 4: Fry the pancakes until golden on each side. Serve with either maple syrup or vegan cream cheese frosting.

Use an electric hand mixer to mix the softened vegan butter, powdered sugar, and vegan cream cheese together until smooth and creamy. Before serving it over the pancakes, you may want to microwave it for 15-20 seconds to make it easier to drizzle.

Other Vegan or Gluten-Free Pancake Recipes 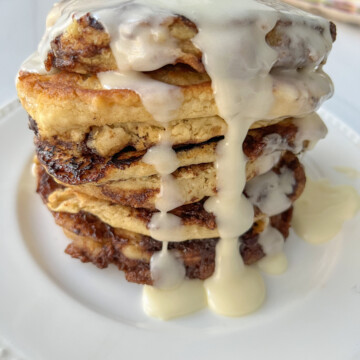 Serving: 1gCalories: 90kcalCarbohydrates: 16gProtein: 1gFat: 2g
Tried this recipe?Let us know how it was!