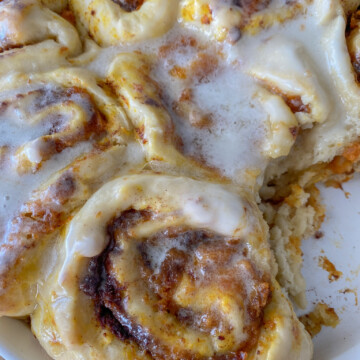 Q: Do you have a vegan/gluten-free pumpkin cinnamon rolls recipe? A: Yep!! Click Here for my No-Yeast Pumpkin Cinnamon Rolls Recipe. Q: Can this recipe be made with any non-dairy milk? A: Yes, you can use any non-dairy milk in this recipe, but my preference is unsweetened oat or almond milk. If you're not dairy-free, you may also use regular cow's milk. Q: What can I use in place of the vegan butter in this recipe? A: I'd recommend using any vegan or regular butter (if you're not vegan) in this recipe. You may also use melted coconut oil for a healthier alternative. Q: Do I have to make this recipe with gluten free flour? A: Nope! You may use regular all-purpose flour if you are not gluten-free!

Serving: 1gCalories: 269kcalCarbohydrates: 42gProtein: 4gFat: 9g
Tried this recipe?Let us know how it was!