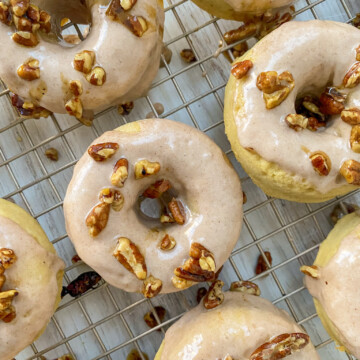 Maple donuts are a fall-time staple! These vegan gluten free maple donuts are as easy to make at home and as cakey, moist, and delicious as the ones you'll find at the bakery! I used purecane's 1:1 sugar substitute brown sugar and maple syrup in the batter and the result is a buttery and delicious donut thats great plain, glazed with maple butter, or spread with my famous vegan cinnamon cream cheese frosting!
5 from 1 vote
Print Recipe Pin Recipe
Prep Time 10 mins
Cook Time 20 mins
Total Time 30 mins
Servings 16
Calories 141 kcal

Serving: 1gCalories: 141kcalCarbohydrates: 20gProtein: 2gFat: 6g
Tried this recipe?Let us know how it was!