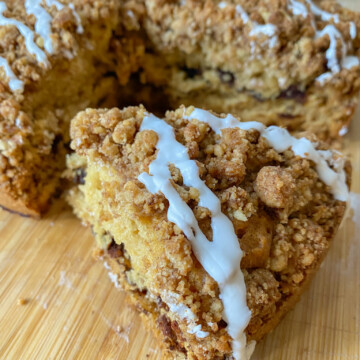 This vegan coffee cake is heavenly! It's soft, fluffy, and super moist! The filling is made of cinnamon and brown sugar, the batter is sweetened with maple syrup, and the streusel topping is out of this world! This is a delicious vegan dessert that is going to impress everyone!
5 from 3 votes
Print Recipe Pin Recipe
Prep Time 10 mins
Cook Time 50 mins
Total Time 1 hr
Servings 16
Calories 257 kcal

Serving: 1gCalories: 257kcalCarbohydrates: 35gProtein: 3gFat: 12g
Tried this recipe?Let us know how it was!