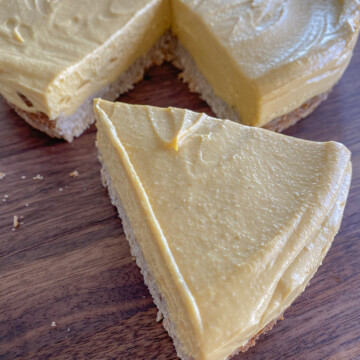 This Vegan Pumpkin Cheesecake is the perfect way to enjoy a creamy classic over the holidays! It's made with boiled cashews, pumpkin puree, and delicious dairy-free cream. This finger-licking good pumpkin cheesecake filling is topped over a delectable cinnamon sugar oatmeal pie crust. This is a delicious and creamy vegan holiday dessert that everyone will love!
5 from 1 vote
Print Recipe Pin Recipe
Prep Time 45 mins
Cook Time 5 hrs
Total Time 5 hrs 45 mins
Servings 16
Calories 330 kcal

Serving: 1gCalories: 330kcalCarbohydrates: 30gProtein: 10gFat: 20g
Tried this recipe?Let us know how it was!