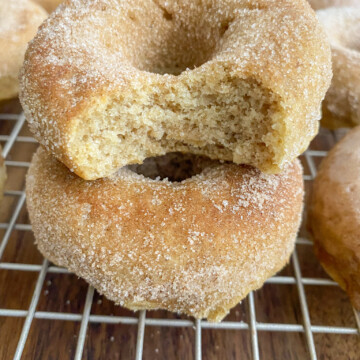 These vegan apple cider donuts are too good for words! Enjoy these fall time vegan donuts for dessert or breakfast. The batter is made with healthier ingredients like flax seed and applesauce. They're baked and not fried, making them a wholesome family-friendly treat. This recipe for vegan apple cider donuts is so easy and your home will smell incredible while these bad boys bake. Toss them in cinnamon sugar or drizzle them with cinnamon glaze. Everyone in your home is going to love these scrumptious vegan apple cider donuts and no one will guess they're dairy and egg free!
5 from 2 votes
Print Recipe Pin Recipe
Prep Time 5 mins
Cook Time 25 mins
Total Time 30 mins
Servings 18
Calories 122 kcal

Serving: 1gCalories: 122kcalCarbohydrates: 22gProtein: 1gFat: 3g
Tried this recipe?Let us know how it was!