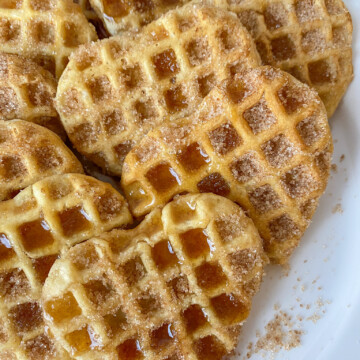 Looking for an extra special breakfast treat? These vegan waffles are sure to put a smile on your face! Everyone in your home will love them and no one will believe they're vegan and gluten free. You only need 6 ingredients to whip up a batch of these 20 minute vegan waffles. Toss them in cinnamon sugar and drizzle with maple syrup. This is a family-friendly breakfast recipe that you're going to want to make over and over!
5 from 1 vote
Print Recipe Pin Recipe
Prep Time 5 mins
Cook Time 15 mins
Total Time 20 mins
Servings 8
Calories 80 kcal

Serving: 1gCalories: 80kcalCarbohydrates: 2gProtein: 2g
Tried this recipe?Let us know how it was!