Enjoy the flavors of a buttery and ooey gooey cinnamon roll in one perfectly portioned single-serve Cinnamon Roll Baked Oatmeal. This recipe will take you minutes to make and everyone will love it!

Step 1: Preheat the oven to 375. Prepare 6 ramekins by spraying them with nonstick baking spray.

Step 3: Prepare the cinnamon swirl by whisking together the melted vegan butter, cinnamon, and purecane or sugar. Create a swirl in the center of each ramekin.

Step 5: While the oats bake, you have the option make the vegan cream cheese frosting. Drizzle it over the warm oats and enjoy.

What can if I don't have any vegan butter?

Coconut oil is a great alternative to vegan butter. I recommend adding a small pinch of salt to the oatmeal mixture if you are using coconut oil. Coconut oil has a naturally sweeter taste than vegan butter so the salt will help to balance out the sweetness.

What if I don't have a blender? 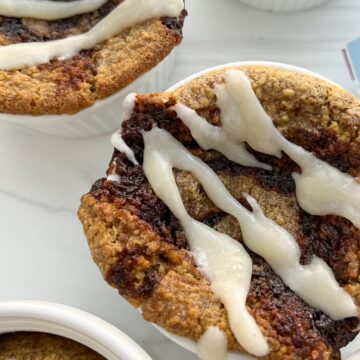 Serving: 1ramekin without frostingCalories: 280kcalCarbohydrates: 32gProtein: 4gFat: 16g
Tried this recipe?Let us know how it was!