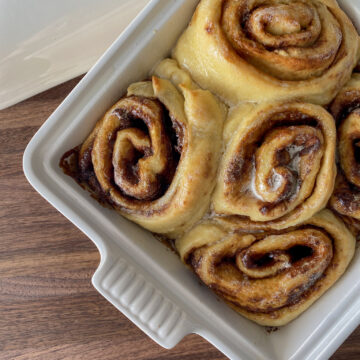 These vegan cinnamon rolls are one of the great wonders of the world. They are easy to prepare and absolutely delicious! The dough is light, golden, and buttery. The filling is sweet with brown sugar and cinnamon. The batch is glazed with maple butter glaze and the result is a truly heavenly vegan cinnamon roll that the entire family will love!
5 from 1 vote
Print Recipe Pin Recipe
Prep Time 1 hr 30 mins
Cook Time 30 mins
Total Time 2 hrs
Servings 10
Calories 281 kcal

Serving: 1gCalories: 281kcalCarbohydrates: 35gProtein: 3gFat: 14g
Tried this recipe?Let us know how it was!